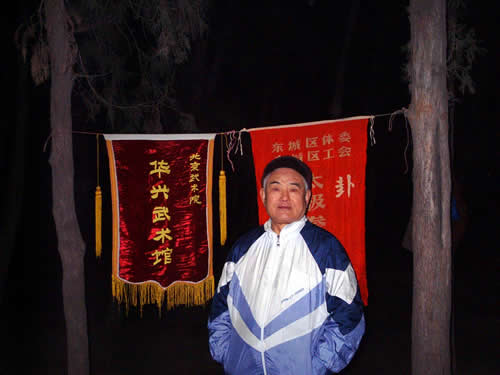 Master Wang Juxing was born in 1930 in Laizhou, Shandong Province.

He practiced Wushu after his uncle Master Wang Jingzhou. From 1942, he followed Master Tian Xiang, the famous Tongbei master, practicing Tongbei boxing, Long boxing (Changquan), etc. From 1948, he learned to practice Hard Qigong, Dianxue (hitting at certain acupoints), massage and so on..

After the foundation of the People's Republic of China, he became a student of Master Liu Peisong (or Liu Wancang), practicing Song style Bagua, Wu style Taiji, Taiji Pushing-hands, Muslim Snap Kicking, Cha boxing, and all kinds of weapons. In autumn of 1978, he performed Taiji Pushing-hands inside the People Conference Hall, and was awarded the second excellent of the competition. Good reputation and award were awarded for the contests in 1979 and 1980.

And in 1996 he was appointed to researcher on Wushu theory and history for the Beijing Wushu Association. 1991 in the Beijing University of Sports, Master Wang convinced a fighter from the United States with his Taiji skills. Master Wang devoted himself to train the youngsters for many years, lots of his students obtaining excellent results in contests sponsored by the State and Beijing city. For his great contribution to carry forward Chinese Wushu, his name was recorded in the Celebrity of Chinese Wushu and the Contemporary Wushu Records of the Capital City. In spring 2005 a book was published that he wrote on Song style Bagua.

The teachings of Master Wang come from the following Lineages:

Wang Panlin, Master Wang's son, obtained the complete styles of Song Style Bagua and Wu style taijiquan from his father. It was sad to hear that in April 2006 Master Wang suffered a cerebral thrombosis, that stopped him from actively continuing his beloved taijiquan and bagua training, but when I visited him in September 2006 I was glad to find him bright and interested in my training. The training of his club in Ditan Park is continued by his disciples mr. Ma and mr. Shi. I started my training in Master Wang his system in Februari 2003 in Beijing in Ditan Park, and try to continue when the opportuniy is there.

In TCC Vereniging Sung it is possible to train the following parts of Master Wang his system:

From his Taijiquan: the first part of the traditional Long Form, and also "The 13 forms of Taiji Rod", which is a traditional Taiji Rod form, nowadays rare even in Beijing. The weapon used is a thin flexible wood rod, about 1.5 meter long.

From Song style Bagua, of which Master Wang is probably the main representative, the Old 8 Palms circular movements, and Bagua straight line exercises.